What’s the Most Common Last Name in the United States?

Family History, Most Popular, Surnames
20 October 2014
by Rebecca Dalzell
If you have a Smith in your family, you have a staggering 81 million records to pore through on Ancestry. Smith has long been the most common surname in both the United States and Great Britain. Each U.S. census lists more and more Smiths, from 274,919 in 1850 to 2,376,206 in 2000. Yet the name is far from generic and has a rich and complicated history.

Surnames began to come about in the Middle Ages, when people were often identified by their trade. Just about every village in Britain had a smith, usually a blacksmith, who made horseshoes, plows, swords, armor, and other needed items. These workers were skilled and had status in the community, which contributed to the name’s wide usage. Some names were once more specific, with people called Combsmith or Smithson, and were later shortened to Smith. 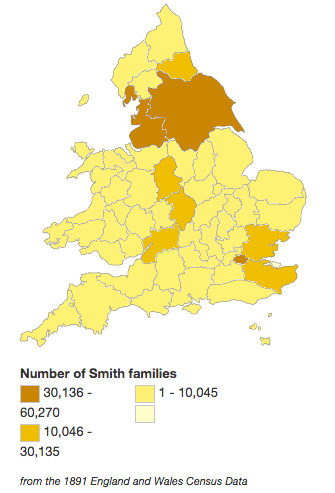 The name was used across the British Isles, though the 1891 census shows a higher concentration in areas like Lanarkshire, Scotland, and Yorkshire, England, and fewer in southern counties like Cornwall and Devon. The Welsh had a different naming system, calling people after their fathers’ first names, so trade names like Smith are less common there. 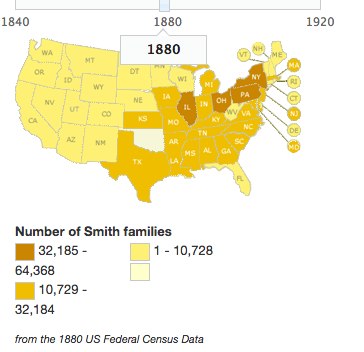 American Smiths do not share anything close to a common lineage. They are black and white, with ties to German Schmidts, Irish O’Gowans, or former slaves. The name is sometimes even the result of translations by clerks or immigration officers. For instance, according to the authors of Surnames, DNA, and Family History the Gaelic name MacGowan means “son of the smith” and so was sometimes translated as “Smith.”

Census data show that there have been Smiths all over the United States from the beginning, especially more populous states like New York and Pennsylvania. So like the industrious ancestors you’re searching for, you Smiths will have some work to do.

Discover your family story—whatever their name is. Start free trial.